METAP® is a peptide mixture derived from enzyme hydrolysis of globin proteins. Among these peptide, it has been found that the Valine-Valine-Tyrosine-Proline tetrapeptide has strong inhibitory activity on neutral fat elevation.
Furthermore, it has also been found to inhibit the increase blood glucose and of blood pressure.

Was it discovered by ‘a pig that lost weight!?’

At the time, as a feed additive to make pigs effectively gain weight, a hydrolyzed protein was developed. Upon giving the developed feed to pigs, the pigs contrarily lost weight instead of gaining weight.
Thereafter, many studies were conducted to determine the underlying mechanism for the pigs’ weight loss, which led to the creation of the present METAP®. 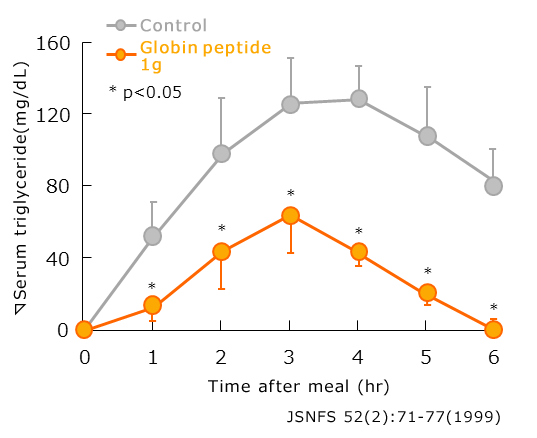 Therefore, we found that globin peptides inhibit the increase in neutral fat.

Furthermore, a similar pattern is seen when remnant-like lipoproteins are measured. 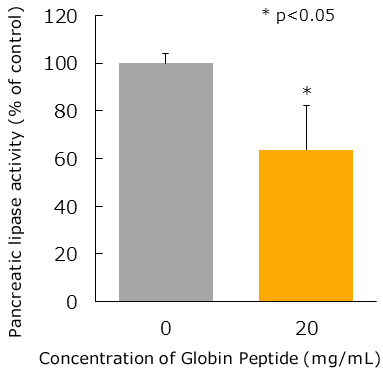 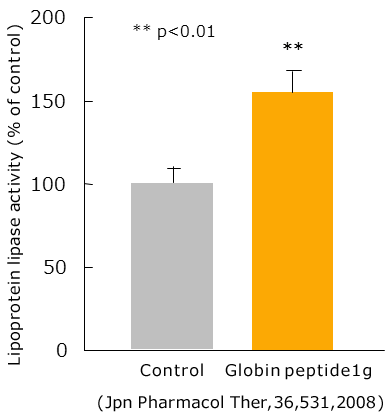 Following meals, blood neutral fat is primarily present in the form of chylomicron, which is a lipoprotein.
Lipoprotein lipase (LPL) works to break down neutral fat into free fatty acids and glycerol.

Promotion of Lipid Metabolism (in vitro) 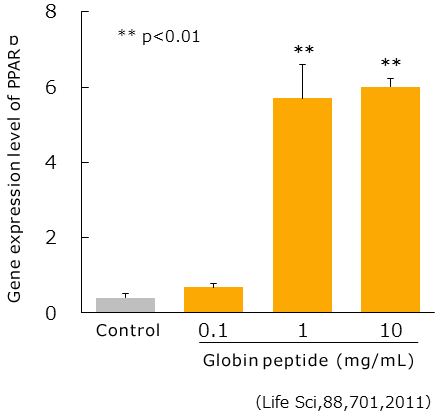 Therefore, it is thought that by increasing the amount of PPAR α expression, globin peptides promote fat combustion.

Promotion of Lipid Metabolism (in vivo) 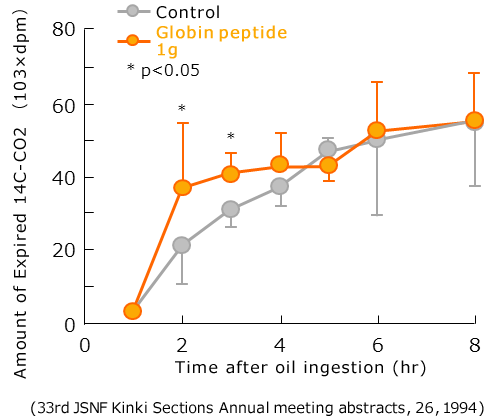 To examine the combustibility of consumed fat to be used as energy, during meals fat is labelled with 14C radioactivity, and the amount of 14C- CO2 respiratory excretion was measured.

Upon giving mice olive oil labelled with 14C radioactivity and globin peptides, it was found that compared to the control group, the amount of 14C CO2 respiratory excretion was significantly increased for 4 hours after administration, and as energy, the fat tended to be easily burnt.

Increase of adipogenesis (in vitro) 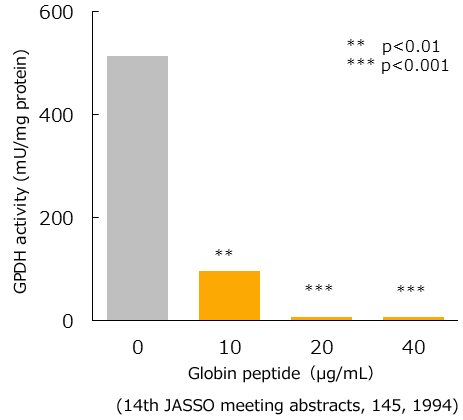 Therefore, it is thought that globin peptides inhibit the accumulation of fat. 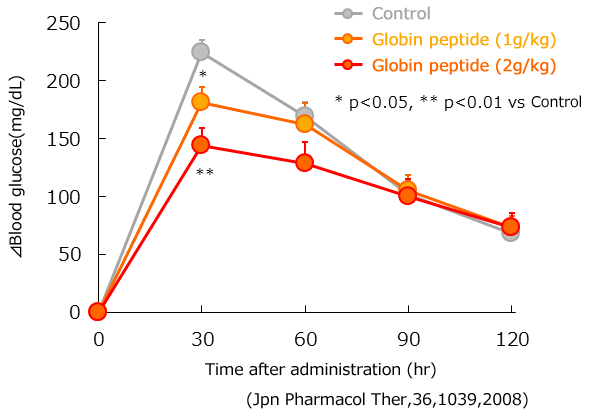 Upon oral administration of glucose and 1 g or 2 g of globin peptide to mice, at both concentrations the increase in blood glucose levels was significantly inhibited at 30 minutes after glucose loading.

Promotion of glucose uptake (in vivo) 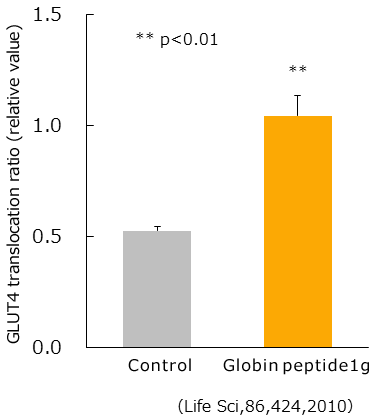 Thus it is thought that globin peptides promote sugar uptake by GLUT 4, and promotes the use of sugar.

Improvement of Insulin resistance (in vitro) 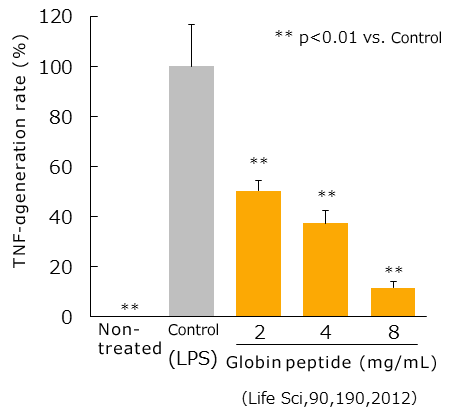 TNF-α works to inhibit insulin signaling, and not only inhibits the expression of GLUT4, which incorporates blood glucose into cells, but also its functioning.
In this way, TNF-α causes insulin resistance, and thus it is important to inhibit the production of TNF-α.

Suppression of blood glucose (in human)

At China’s Center for Disease Control and Prevention (CDC), to examine the effect of globin peptides on patients with type 2 diabetes, 50 test subjects were given either tablets containing 1 g of globin peptide, or a placebo twice a day for 30 days, and the effect on blood glucose levels was examined.

The effect on blood pressure in single-dose administration (animal experiment) 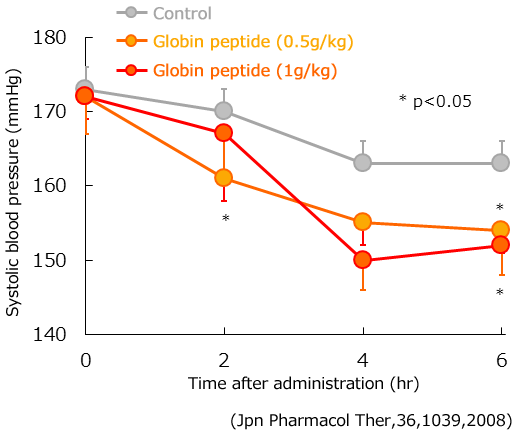 Furthermore, in a different trial examine, the effect on blood pressure was examined when normal SD rats were orally administered 1 g/kg of globin peptide, however there was no effect on normal blood pressure observed.

Therefore, globin peptide has no effect on the normal blood pressure, and it was found that blood pressure was lowered when in a hypertensive state.

The effect on blood pressure in repeated administration (animal experiment) 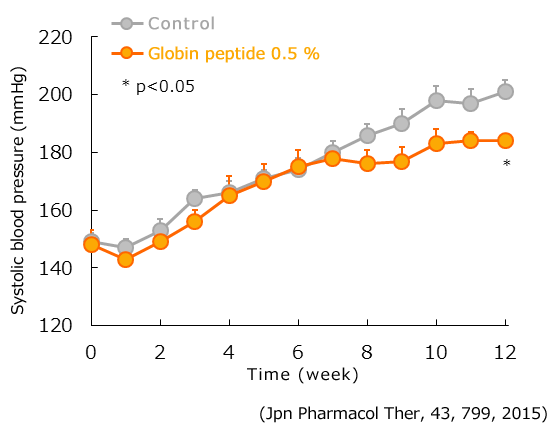 Spontaneously hypertensive rats (SHR) have accelerated sympathetic nerve function, in conjunction with resistance vessel abnormality, and thus in animals with spontaneous onset of hypertension, as in the control group, blood pressure increases as age in weeks increases. 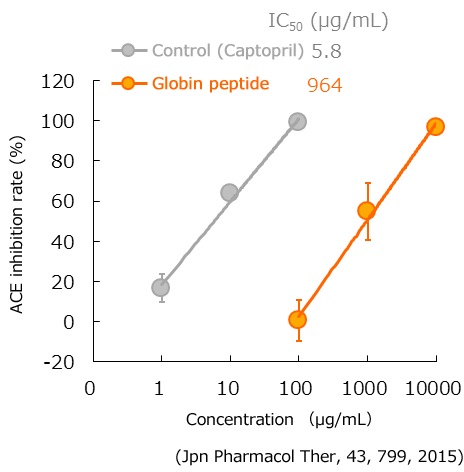 Angiotensin-converting enzyme (ACE) is an enzyme that converts angiotensin I into II, and angiotensin II is a substance associated with blood pressure elevation. By binding to such receptors, angiotensin II promotes ‘aldosterone secretion’, ‘vascular contraction’, and ‘water and sodium reabsorption’.
Furthermore, aldosterone is a hormone that increases blood pressure, and increases resistance of peripheral blood vessels by way of vascular contraction. Moreover, by promoting water and sodium reabsorption, the volume of blood in the entire body is increased, which leads to increased cardiac output.

in this way, by inhibiting ACE activity, it is thought that globin peptides inhibit blood pressure elevation.

Mice were given a single oral dose of globin peptide at 10g / kg of body weight and observed for 7 days, however there were no abnormal findings observed.

Rats were orally administered globin peptide at a dose of 4 g/ kg/day for 28 consecutive days and observed, however there were no abnormal findings.

Subject blood was examined using the Ouchterlony method, however there were no antibodies to globin peptides observed.